Prior to 1931,the eight or Keating Fire District of Ross Township was without immediate fire protection,with the exception of the assistance that could be provided by Perrysvile Fire Company Station 248,which is 3.5 miles from our district,our course of action was the bucket brigade.

Besides the numerous fire insurance rates, our residents lived in a constant fear of fire because of inadequate fire protection which generally means a complete loss of property and life.

In early 1931 a public spirited resident from Westview Ave decided that something needed to be done to assure that his friends and neighbors of a volunteer method of combating the loss of fire and life to the community. In April or 1931,a meeting was held at the Hamilton school on Cemetary Lane for the purpose of establishing a permanent fire company, about 35 residents from the district attended the meeting and formed the present fire company.

During the first meeting ,temporary officers were elected with the purpose of establishing a permanent fire company and ways and the means to fund and purchase fire protection equipment.The group secured the Second floor of the Pittsburgh Railways Keating Car barn to hold meeting’s on the second an fourth Monday of every month. The first major problem the founders ran into was how to obtain the money to purchase the first fire truck.

The first project was a card party held in the gym of the Samuel Hamilton Gym.All of the prizes went to equipment such as chairs, tables and cards and the bingo equipment was borrowed.On July the third 1931 Keating Fire Company received it's charter from the state of Pennsylvania. The fire company was no able to operate and it's title became the" Keating Fire Company of Ross Township of Pennsylvania Inc". The fire company was also supported by many carnivals as well as donations from neighbors and friends.

On August the 18,1931 a contract was signed by Keating Fire Company with the delivery of a brand new Buffalo Fire Engine at the cost of $6,000.00.This piece of equipment was delivered in October of 1931.

In April of 1932 the bylaws governing the organization and the first elected officer was installed into office, but Keating Fire Company still didn't have a permanent station to house the new fire truck.

Mr. Fred Etter furnished the space in his garage on Perry Highway. Mr. George Kim permitted the siren to be placed near his home and gave 24-hour service for fire call's and kept a record of all of the call's. Mr. Ivory  donated a vacant house on Perry Highway to be used as the first company headquaters.

Ever since 1931 our members have been active in the community to aid in bringing adequate fire protection and also the distribution of fire hydrants and a water storage tank on King Ave to supply water to the community and lower the fire insurance of the home onwer's. This also aided in the centralized dispatching system as well.

Through the dedication of the member's many change's over the years have occured which of first was the purchase of a 1960 Ford Squad Unit for the price of $15,000.00 which was refurbished on 1982 at that time a 12,500 watt Generator was installed and in 1974 a Hahn 1500GPM Engine was purchased for $45,690.50.There was also renovations done to the building which included a peaked roof and the construction and a crew room and officer's office, all of the work was completed by the members of the Department.

The Firefighter would like to acknowledge the Ladies Auxiliary, which was disbanded in 1981 after 50 years of working shoulder to shoulder with the firemen. The firemen would also like to acknowledge the "Young Women's Auxiliary" which has been in existence since 1979,which in 7 years have been a great help to the Fire Company. We sincerely hope that today Keating Fire Company will remember the hard work and support the founding member's did for the Department and to continue to build and strengthen the Keating Fire Company.

The Member's of Keating Fire Company 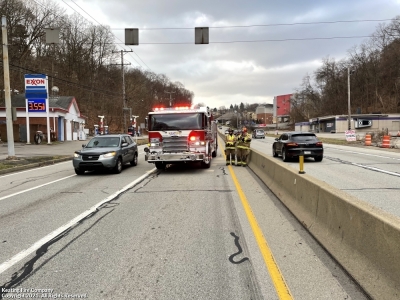 This site has been viewed 6,731 times.
News
Events
Pictures
Apparatus
Maintained by the members and staff of Keating Fire Company. Designated trademarks and brands are the property of their respective owners. Copyright © 2006-2022. YourFirstDue Inc. All Rights Reserved. Content on this web site is supplied by Keating Fire Company. YourFirstDue Inc. cannot be held responsible or liable for any content, text, pictures, or any other media found on this web site.
Management login
Powered by